The Bayou Pierre Bridge is located between Desoto and Red River Parishes in Louisiana. The bridge owner requested that SDR perform independent analysis and testing of the existing structure to examine the possibility of transporting a special permit vehicle, called the dragline, across the bridge. Unloaded, this vehicle weighs around 7,100 kips. When loaded, the vehicle weighs around 10,000 kips. Each span of this bridge consists of 10 prestressed concrete girders; the substructure consists of a concrete cap and steel piles.

Analysis was performed in accordance with AASHTO LRFD using SmartBridge Suite software. A refined 3D Finite Element Analysis was also performed. Analysis results concluded that the piles would experience settlement during the vehicle passing. The results also indicated the possibility of permanent cracking of the prestressed concrete girders; therefore, it was decided to continuously monitor the bridge during the passing of the dragline vehicle and to reduce the weight of the vehicle compared to the originally proposed weight.

For the load testing stage of the project, strain gauges were placed along the girders and piles to measure the stresses and forces in critical members. Linear variable differential transformers (LVDTs) were used to measure the settlement of the structure. A series of preliminary bridge tests were performed to determine the overall bridge response and the possibility of settlement; results were used to calibrate the FE model.

During passing of the Dragline, no damages that compromise the structural integrity of the bridge were witnessed. SDR performed a follow-up inspection which showed only minor spalling and damage, verifying the good structural health of the bridge after the passage of the dragline. 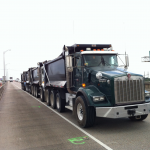 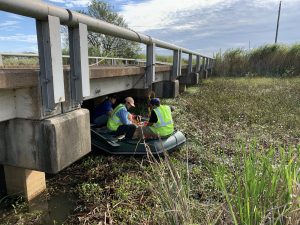 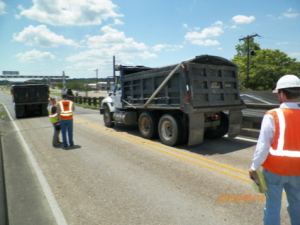 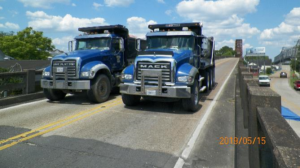