The Williams Road/SW 66 Street bridge over I-75 in Ocala, Florida was built in 1989. The bridge consists of four (4) spans with a total bridge length of 272.5 ft. The superstructure comprises four (4) AASHTO Type III precast prestressed concrete beams. The bridge was impacted by an over-height truck, causing damage to exterior and interior beams. Damage to both beams was in the form of partial loss of concrete section in the bottom flanges and webs with exposed prestressing strands, but with no rupture of prestressing strands. During inspection it was also found that the exterior beam had old repair at the right end of the beam and exhibited signs of distress, e.g. cracking and delamination.
Repair of the beams included restoring the concrete section of the bottom flanges and webs.  Also, externally-bonded CFRP was applied to confine the restored section and provide redundancy to the shear strength. The repair method allowed I-75 to remain open during construction. 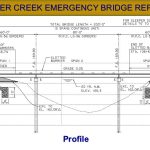 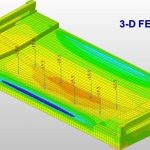