Phase I of MacArthur Drive Interchange is to provide ramp connections between the westbound direction of US 90 Business (Westbank Expressway) and the westbound frontage road near Peters Road and Harvey Tunnel. The Westbank Expressway was constructed as a four lane, divided, limited access highway in the late 1950’s along with the original Greater New Orleans Mississippi River Bridge and the Harvey Tunnel.

SDR’s first task was to carry out a bridge load test coupled with detailed 3-D finite element (FE) modeling of the existing bridge including the inverted-T piers. The results from the complex non-linear FE modeling and the load testing were used to determine the bridge sufficiency. The bridge was found to be sound and a recommendation to proceed with the bridge widening project was made to LADOTD. SDR was also tasked with the design and final plans production of all complex superstructure elements consisting of precast prestressed U-girders and LG-girders, inverted-T cap beams, and all complex columns with unbalanced loads. In addition, due to the structural complexity of the existing inverted-T piers, special analysis was required to evaluate and determine the cut lines for accommodating the widening which, was also performed by SDR.

SDR staff knowledge and experience was essential in proposing new design that is simple and cost effective while maintaining all aesthetic aspects of the existing bridge. 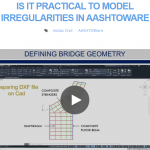 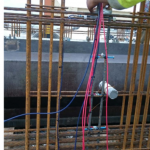