The Luling bridge, built in 1983, is an historic bridge in St. Charles Parish. The bridge is a cable-stay bridge, consisting of twin trapezoidal steel box girders with an orthotropic deck. Deck overlay and repairs were expected to be performed on this bridge. Cracks on the steel orthotropic deck, extending from the transverse web stiffeners, were observed during inspection of the bridge. The wearing surface was comprised of several different materials, including numerous asphalt mixtures and two reinforced concrete sections.

Detailed Finite Element analysis using shell elements was performed to study the state of stress at the onset of cracks under normal loading and fatigue loading. Analysis results revealed that the main cause of cracking is the rigid connection between deck and transverse stiffener. These concentrated stresses can be reduced by trimming the web stiffener. The full three-dimensional numerical model was also utilized for the main spans to check the strength of the cables and perform a LRFR load rating of the bridge under new overlay loads and during construction. A novel overlay section was developed, consisting of an Aramid/Glass FRP-Epoxy underlayment system, angular granite aggregate, and Steel Fiber Reinforced Concrete (SFRC). 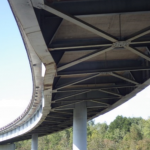 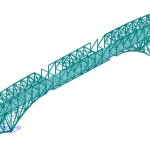